Another amazing and shocking discovery from ancient Egypt. I really love Egyptian civilization and their history. And they are really shocking me every day more and more. How they were smart and educated its the biggest mystery in the world.

Have you ever wondered how old a gel can be? Almost everyone uses the gel in our lives, many people can’t imagine their lives without a gel … but I never thought it was used by ancient Egyptians.

Anyway scientists found the first gel was used 3500 years ago. Ancient Egyptians were using a mix of animal and plant fat to stabilize Hair. They even used the gel for mummies because their hair should look tidy after the resurrection.

Ancient Egyptian adored and loved cat very much. They were holy for them and so they took them as one of their Gods.  But thing which I have never knew is that if someone killed a cat so he was also killed. But it happened really rare.

However now it was discovered that the dead cats of cats were dressed like kings and were hidden in coffins. So Every cat statue contains coffins with the true dead body cat. Simply said: cat were burried like the pharaoh.

The Statue of the writer “Metric”

Look at his eyes. Don´t you have feeling its true? He is watching at you? . Metric was famous about how hard he was working so his eyes were often tired. And from appreciation of his work they made him this statue to remain his tired eyes forever.

They used stone Lazuli to have perfect blue eye and around his another material to have red colour. Well, its definitely not easy specially to make the red colour. How they did it? Who knows, this is the only statue which they made like that..

This is a truly amazing picture. Even if someone can call it by chance. However, it is no secret that the ancient Egyptians had a perfect knowledge about stars. According to stars, they built buildings and made decisions in life.

But just now they found the ancient Egyptians depicted a Milky Way in their pictures . Previously, people just thought the picture was a night, but it was a misconception. Who knows what else we will discover from the knowledge of stars in ancient Egypt?

A little scary picture of mummy’s hand of unknown woman. But the point is that you still can see Henna on her nails. Women have adorned the body with henna since ancient Egypt. And Even today you can see  women paint their nails and body by Henna in Egypt.

But the thing which shocked me more than the Henna itself is the fact that her fingers and nails remained perfectly preserved.

In this photo, scientists try to show how ancient Egyptians built everything perfectly, in detail, and especially mathematically. Till now, it is speculated how they could do it and what they intended by it.Because ancient Egyptians did nothing by chance,they always knew what they were doing.

Moreover, this picture is not the only one, all buildings are mathematically the same, including pyramids, sphinxes, pharaoh statues, etc.

Is it really amazing and I ask myself if anyone could build it nowadays?

Do you like a tea? This is the first kettle in the world! but unfortunately I will disappoint you. It wasn’t meant for cooking the tea. Inside was boiled pure water or a decoction of herbs that was subsequently drank.

NOTE: This Kettle is welded! 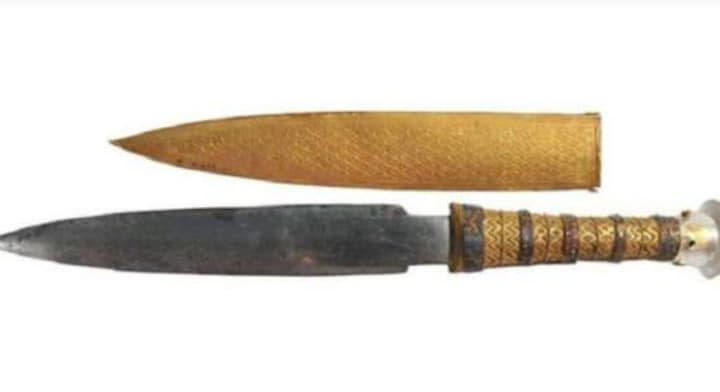 The dagger that belonged to Pharaoh Tut, found with his mummy, is strange in that it is made of an alien meteorite. YES You are reading correctly!

The scientists compared the dagger with the untreated meteorite they found near the Red Sea and really proved to be the same.

Meteorite products in ancient Egypt were very popular. The Egyptians were very mighty of the meteor iron to produce metal. And use them in religious rituals. 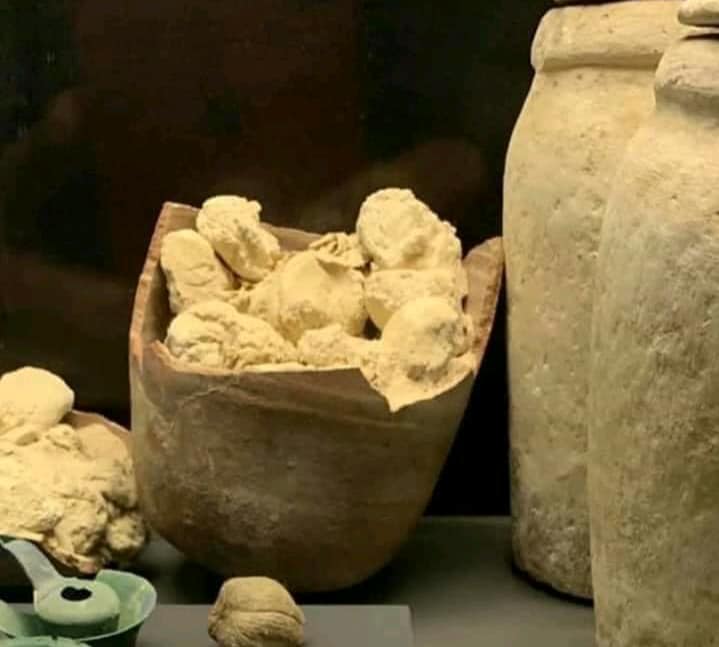 Egyptians were the first in the world to produce cheese. The cheese you see in the picture was found in a Sakkara in one of the tombs. and what astonished them that the discovered cheese lasted.

I have to confirm that Egypt is the country of cheese for me till today. They really have hundreds of kinds and the best I’ve ever eaten.

It is well known that women in ancient Egypt were beautiful, skinny, warrior, dancer and very flexible. They really kept themselves in physical and mental condition. But just now was found out that ancient Egyptians women practiced yoga.

Well I think it was not probably yoga itself as we know it today. But as we can see they definitely were the first one who started using these movements. Ancient Egyptians surprise me more and more every single day …

This is my favorite Egyptian proof that I have read as a child but unfortunately I have not tried it myself yet. Maybe in future

Ancient Egyptian women Diagnose the type of fetus if it was a boy or a girl.

The woman was wetting barley and wheat with a little urine, so if barley grows, she is pregnant with a boy.

If wheat grows, she is pregnant with a girl.

If one doesn’t grow, it’s Proof that it’s a false pregnancy.

Many people were laughing on it but actually I guess it can be true because this way all ancient egypt was using. so was used for a thousands years.

Would you be brave and try it?