When Egypt was Green? 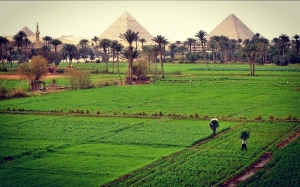 Let’s go back to the time of Pharaohs. What do You know about them As a simply reader? Certainly one of the first thing what You imagine is a sand, desert and pyramids.

The pyramids were supposed to be built in a deserted place in the desert far away from civilization so a normal People could not find them neither reach them.

And if the pyramids were actually built in the open space in desert,by the time people would find them anyway And easily. Isn’t it logical?

Pay attention now because I am going to share with You a shocking imformation, maybe You’ve never heard of it before. A lot of People try to keep this information hidden.

TRUTH is that Egypt was full of greens, Rain Forests and rivers in the deep history. Not only Nile was exist in Egypt As nowadays. And its not a speculation but really Historical fact. Actually not only Egypt but all Arabian countries looked like this. Even, scientists have shown that there is an entire map of rivers and streams under the sand in the desert Sahara.

We all know the stories how People could find a water by luck in the deep desert. Maybe its one of the provements for this statement but the Real question is: Why did the country of Egypt change?

Scientists have researched that over time the climate in Egypt has changed and the earth has begun to dry up. Or here we have a legend or for Muslims the fact that is proven by our prophets:

The Legend says this:

,,In the time of Pharaoh, Egypt was paradise on earth. In this country You could find anything You have wished. Forests, fruits, Gold, gems.. People was satisfied and extremely happy. Till time when pharaoh’s pride exceeded all the limits. Pharaoh began to proclaim among People:,, Do you see how good I rule the country? Everything what You have here is just because of me. I m the reason of your richness And I am your God.,,

God got angry with pharaoh And proved him that He is not the God And punished Pharaoh with Egypt by destruction.

Egypt started to dry up. Rivers and forests became only sand And Stones. And where Is no sustenance there IS surely a death. Drying up continued till there was the Last river in all country. Then one of our prophets humbly prayed to God And begged him for forgiving their pride And for saving Egypt. God accepted his prayers And let the Last river As a source of livelihood.,,

And thanks to this prophet God saved Egypt And put the country Under his control and safety. So nothing worse can happen this country And no one can harm it. Thats why its says Egypt is blessed And safe country because its Under the God’s eye.

Real prove is that Egypt in arabic is written Misr. And this name stayed unchanged since pharaoh time til now. And no one is able to change the country or People.

At the end our legend says that the End of the world Will not Come until the Egypt Will turn to be paradise on the earth again.

But why did I write all of this? Lets go Back to the pyramids topic. The shocking news is pyramids were built deep in Rain Forest so no one can see them neither find them. How ever archeologist doesnt want a normal People to know this Because it would totally changed egyptian history which their built over the years.

Anyway next amazing imformation About pyramid is no one was able to destroy it. Believe me, many People tried it over the history. The Last try was Made by german tourist Just a year ago! But all people failed.

As You well know I have visited pyramids And not only one time And I was in Oasis which was in Sahara. I described for You that in the middle of desert is a part of SEA. So all what I wrote today has own logic, even historical proves because I saw it by my own eyes.

Egypt has really magicaly beautiful history And stories. Step by step we Will Discover them together.

A lot of people is afraid from Lion and Tigers, but for me its a cute,small cat :D and the day when I could carry the baby is definitely one of the best day in my life...if its possible I would love to buy one to my home :D :D :D #lovelions #lovetigers #alexandriazoo #egypt #theniqabgirl #theniqabs
I swear this photo has no filter..the cake is simply amazing alone! Really the best #BIRTHDAY cake ever! So pretty, so delicious..the combination of chocolate and vanilla was simply unforgettable <3 I wish to eat it every single day <3 I never taste such a cake even in Europe..this time #Egypt is 100% winner..Brravooo
I attended a very beautifull birthday party and ofcourse when I sae Olaf, I couldnt miss the chance to photo with it :D :D :D
In the rainy day, I love to remember the sunny day :D #egypt #alexandria #theniqabgirl
Real Raining Day in Alexandria ! <3 what to say, to be stucked in the middle of this rain was really SOMETHING! You will have the story in awhile..stay in touch! #egypt #raining #alexandria #theniqabgirl #niqab
The Show must Go On! I cannot believe this moment happened..after a Years I finally met one of the most important person in my life <3 person who always believe in me, listen and help me any time I need...
Common its time to read new article!!! This time about my own experience with egy nurseries..find out how it was :D https://wp.me/p7ecHL-2Ot
Friends are the best! <3 #theniqabgirl #niqab #egypt #alexandria
Of course I cannot forget a photo with my sister ,,Love,, :D a lot of people say we look like each other but Do we really look so ? I dont think at the end there is a main difference in our look :D :D :D #alexandria #egypt #theniqabgirl #niqab
Finally I bought my favorite Egyptian chocolate <3 I m in Love with it :* #theniqabgirl #egypt #alexandria #niqab
So I was thinking to make a short video for the last month..a lot of things happened actually so if you missed something, never mind...here you are..with these short videos you will always keep on track..Enjoy<3 #theniqabgirl #niqab #egypt #alexandria
I guess even we both covered, you can clearly recognize who is Egyptian :D my new friend is really a lovely person but has a hard faith in this life..i wish everything could be fine for her as soon as possible.. #theniqabgirl #egypt #alexandria #strongwoman