Eid al Adha or Feast of Sacrifice is the second biggest Muslim holiday celebrated over the world. It starts at the 10th day of a Dhu-al Hijjah and last for four days. Dhu al Hijah is the 12th and final month in Islamic calendar, the name literally means “The month of Pilgrimage ” and during this month all the Muslims around the world make a pilgrimage to Mecca. Of course like in every Muslim holiday or occasion we are governed by the moon. So every year Eid al Adha  falls on different day in an  international calendar…

The reason why we celebrate this holiday can be for a lot of people very confusing. Also it is very long history but I would like to make it little bit more clear and easy for you.

The story actually speaks about prophet Ibrahim (Abraham) who received an order from a God to sacrificed his son Ismael. By this order God actually tested Ibrahim if he listen to his words or not and tested him also in the love, obedience and trust to God.

Ibrahim discussed this order with his son and both of them accepted it. For both of them the God was on the First place in their lives so they did not want to be unjustice to God. Because God is the one who give the life and also take back the life, so everything is by his order and whatever God wants it should be done.

But even both of them accepted we cannot forget on our biggest enemy ever – The devil. The devil tried to play on them to disobey God. and if you ask how he played? Of course he played on the feeling and the basic feeling in this was that Ismael was the first son of Ibrahim. So for sure it was not easy to accept this order. Also Ibrahim did not have a children for a years and he desired for them so much and the mother of Ismael was his second wife. And when he finally got the child he got a order to sacrifice him. Can you even imagine how Ibrahim had to feel? How hard was this on him? I am pretty sure that all parents around the world will perfectly understand this feeling of hardship. And even people without children will feel it.

In all cases Ibrahim did not listen the devil and threw a stones on him till he disappeared. And when Ibrahim with his son reached the place where he should sacrificed him so right before he did it, God intervened by sending angel Jibra` il (Gabriel) and he informed Ibrahim that his sacrificed was already accepted. Then Ibrahim sacrificed a sheep instead of his son Ismael.

I will finish the story this way but I would like to inform you that the story itself is much more longer with a much more details but I just tried to retell the story easier way.

As you can understand, the story of Ibrahim is the main reason why we sacrifice animals every single year. We can say it is a respect to our prophet Ibrahim and obedience to God. But this sacrifice has another important mission. Please pay an attention !

All the meat of every sacrificed animal in the name of God is divided into three parts.

First part of the meat is for the Family

Second part is for relatives, neighbors and friends

Third part is for the poor people and needy ones. 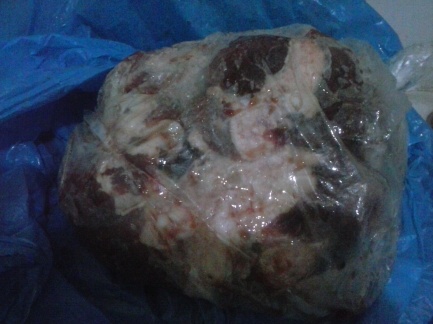 My own meat which I received as a gift

The point is in those days similar like in Ramadan, no one is poor. All people has enough food and no one die of hungriness at all. You also visit your family and relatives and you try to make them happy as much as you can. And again Muslims believe for every single good deed they will be rewarded from a God. So everyone try to make his best.

I described you all the reasonable reasons. But right now I am going to describe you the reality and my experiences how it goes in Egypt.

We start to celebrate this holiday actually 1 day before the Eid al Adha with the Day of Arafah. This all day Muslims are fasting (since sunrise till sunset) and if you finish your fasting so God will forgave you all you sins from the past year and even future year. So for Muslims this day is really extremely important. After sunset they start to eat a meat. And it is like official opening for Eid al Adha.

The next day at sunrise all people goes on the street for a common prayer. Man are praying separated and women also but all in the same time. I give an importance on the separating as you can see because nowadays and even in Egypt, people started to pray together (men besides women) and it is really very wrong in Islam and the prayer will not be accepted by God.

But the prayer itself is too beautiful. It is always one of the best moment in my life. Everywhere is calm and in front of you is the sunrise and you know that all those people woke up and came just for worshiping God. You really feel peace and calm inside of you. Anyway the prayer is very short we can say about 10 minutes and after that we start to slay the animals.

Men are praying a common prayer

The slaying of animals are mostly made on the streets so everyone can see it. And of course the feeling of the sacrifice is the most strong right after the praying but not all people slay them in this moment. People slay the animals during all the fourth days. So since start till the end of Eid al Adha.

And now the most important talk what you will be interested in for sure.

Nowadays a lot of people say and unfortunately even Muslims that slaying of animals is really something very bad and should be forbidden. And they also complain about the way of killing the animals. WELL Let` s look at it step by step…

And compare this way of killing with a slaughterhouse. Is not it a big difference? Really from my heart I hate slaughterhouse. In my point of view the animals are suffering too much and too badly and then even the meat can never be good. Years back I was thinking to stop a meat just because of the slaughterhouse.

And I am also very sensitive person who cannot afford killing animals or threat them unjustly. But when I saw the Muslim way of killing and I saw that the animal does not suffer at all – I did not find anything wrong at it. And I really agree with the Islamic way of killing.

Of course I saw a Muslims killing animal bad way and they were even afraid of the animals etc.Really NO COMMENT to this. Simply not well educated people you will find over the world. I strongly believe that people who treat animal bad it will come back to them also bad way in their life and hereafter.

Kid is playing with animal before the slaying

Then there is a question if animal should be killed or not ?!

Everyone has his own opinion on this and I highly respect all vegetarian people. but people who gave me this question are actually eating meat almost every single day. I think that the main problem in Europe is that the people got used that they go to the supermarket and they buy a meat which looks very luxury so on the looking you find nothing wrong and even with another goods like a milk or yogurt or eggs etc.

But the problem is we forgot from where those stuffs are coming or the process how these goods are made. And specially the children mostly never saw animals alive and they cannot even imagine that the meat is coming from the dead animal. This our society is playing with us really a big game. I would say they want to forget our nature, just the society wants to have people who will just listen and do not understand anything at all. So please be little bit more open minded and try to see the stuffs from different point of view.

Way of celebrating in Egypt

Let`s come back to Egypt now. The rest of the day you spend that you will visit your family and relatives and friend and neighbors etc. And you will spent the time with them. The traditional food in This days is food called “Al Fata” I already wrote the recipe – you can find it right HERE

And actually this food you eat for a month. Or you can eat another food but always consist a meat but as I say mostly the people eat Al Fata. Yes I agree it is definitely very boring ! But its egyptian traditional. For me the Eid is fourth days so for me in the forth day I give my goodbye to the meat and try to reback to the normal lifestyle.

Otherwise you also give a present for the kids – mostly money or a sweets. Also in the Eid all Muslims buy a new clothes. So all people are beautiful and very clean. And we cannot forget on  husband and wife because except the others people, even they should try to make happy each other the most perfect way. Make any surprise for each other, or spend the time just together without a children or buy something what you know the other desire on. You know it is not point of money but the point is about your good attention and about the smalls stuffs what you forget every single day. But this point Egyptian people very often forget. They are focusing on the relatives but forget on their own home. What a bad luck !

I think I described all how it goes on Eid al Adha. I wanted make a video for you of slaying our own animal but unfortunately it was not possible so I made at least some photos as you can see in the article but you will find more on my Facebook HERE

“Thank you for reading and please be open minded in every situation in your life.”